Our church exalts the universality of Gospel evangelism (1 Cor 1:23-24), adheres to the Christ-centeredness of the message, recognizes the foolishness of this message to the world, but gives glory to GOD for his sovereignty in salvation (1 Cor 1:24) with the ultimate goal of worshiping Him as His possession (1 Peter 2:9).

Due to extreme weather, the church service on is CANCELLED!!!!!

We have resumed in person worship on June 20. Please come and join us. Services are in Mandarin. 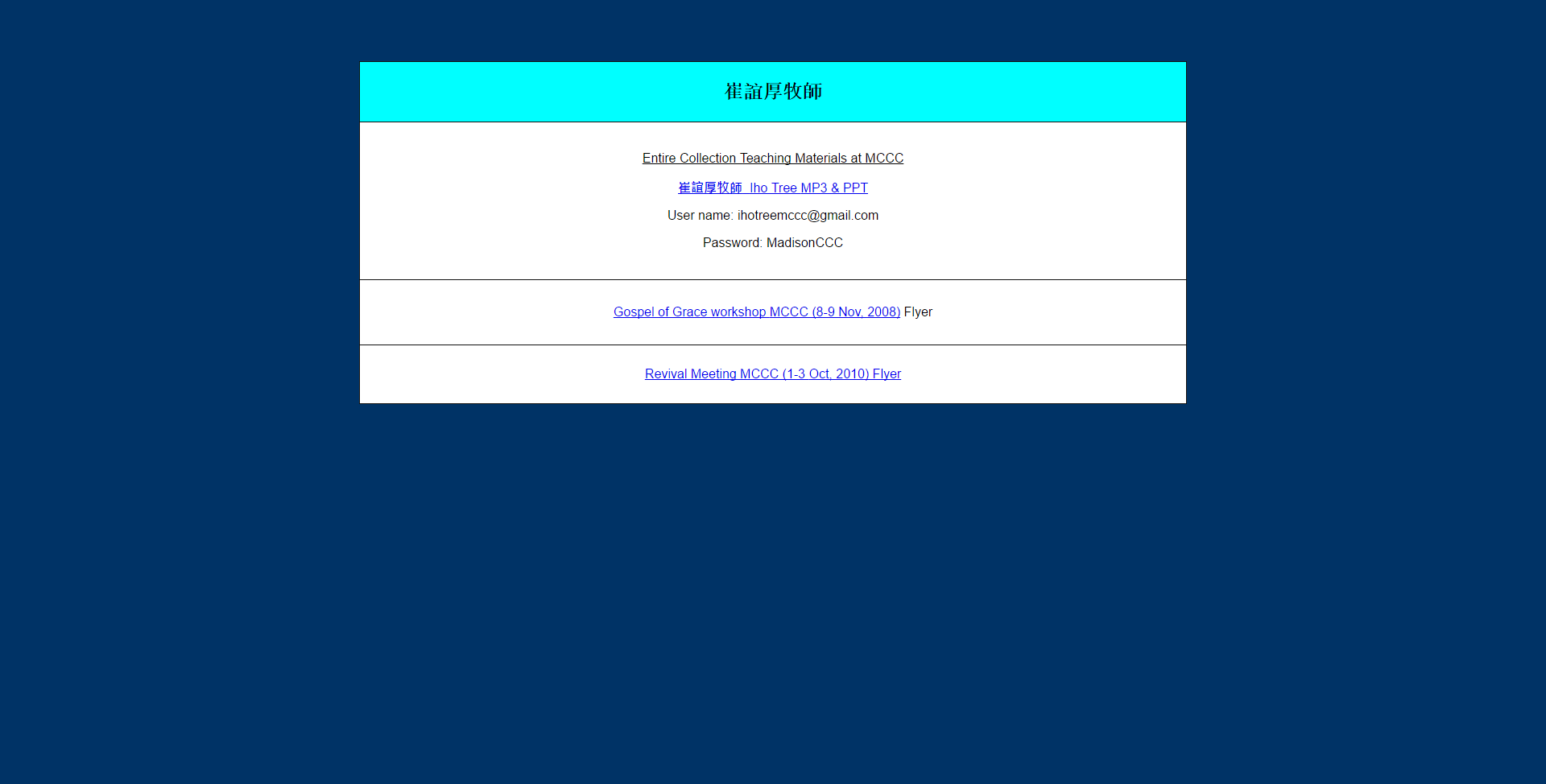 Around 1960, a dedicated group of students and families from Hong Kong and Taiwan started a Bible Study Fellowship in Madison, Wisconsin. They met on campus in the Union South Student Center (now demolished). As the fellowship grew, Sunday worships were started in a basement rented from the Luther Memorial Church on University Avenue.

MCCC was formally established on January of 1986 while still worshipping in the Luther Memorial Church. This was followed by the calling of the first pastor, Stephen Ho to MCCC in July of 1986.

As MCCC expanded in attendance, GOD opened up an opportunity for us to purchase our own building and moved into our current location in November of 1987. Generous no-interest loans by several brothers and sisters contributed to making this possible. Our location in the midst of campus is perfect for student ministry, yet proximity to the suburban areas means easy access to working families as well. Pastor Ho served in our new church till 1990.

MCCC is now driven by systematic teaching at the fellowship level and gospel preaching at the pulpits. The kingdom of GOD is thus being built up as commanded, through the finished work of Christ, by the power of the Word, and in attendance by the Holy Spirit. May all glory be to GOD!

Pastor Iho Tree (崔谊厚) was born in Tainan, Taiwan. He came to the US in 1969 when his family immigrated here. His father was a civil engineer and his mother was a nurse. Both of them went from mainland to Taiwan in 1949 as refugees when they were in their late teens.

Iho attended high school in Loudoun County, VA in a suburb of Washington DC. During his high school years, he developed a strong interest in airplanes. So, upon graduation in 1975, he entered into Virginia Tech and majored in Aerospace Engineering. His interest in aerodynamics led him to further study in computational fluid dynamics at Iowa State University where, in 1981, he received a MS in aerospace engineering. He went back to Virginia Tech in that summer and began his PhD study in experimental fluid dynamics in the mechanical engineering department. His PhD research was in the area of laser Doppler velocimetry in wind tunnel measurements.

During his PhD studies, he met his future wife, Adna (邝向红) who was studying nursing at the nearby Radford University. It was at that time that Iho began to go to church. After 3 years of sitting under the preaching of Pastor Nat Thompson at Calvary Baptist Church (in Radford, VA), God opened his heart and he accepted Jesus as his Lord and Savior. He was baptized in Feb 24, 1985. In May 1986, Pastor Thompson married Iho and Adna at Calvary Baptist Church.

Iho worked in the defense industry after graduation. During 1986-88, he worked on promoting technology transfer in President Ronald Reagan's Strategic Defense Initiative (Star Wars) program. He and Adna moved to Ft. Worth, TX in 1988 where he worked on Infrared stealth technology on advanced tactical fighters at Lockheed-Martin. At the same time he also served as a deacon and coworker in the Chinese churches that he attended during that time. He was called into full time ministry in 1991 and he want to Denver Seminary. He received an MA in Bible Studies from Denver Seminary in 1994. After which he pastored various Chinese churches in Denver, CO, Phoenix, AZ, and Falls Church, VA.

After twelve years of full time pastoral ministry, Iho felt the need for additional training. So, he enrolled in Covenant Seminary in St Louis, MO. He got his master in practical theology (ThM) degree there in 2008. During this ThM studies, he also enrolled in the Doctor of Ministry (DMin) program where he specialized in church renewal and leadership. By 2011, he has completed all courses works in the DMin program.

Iho joined the Presbyterian Church in America (PCA) in 2000 and has been a teaching elder (TE) in the PCA since that time. He is reformed (改革宗, 归正) in his theology and subscribes to the Westminster Standards (韦斯敏斯德信仰信条) which includes: Westminster Confession of Faith, together with the Larger and Shorter Catechisms. He enjoys studying reformed theology books together with church coworkers and applies its teachings in our faith and practice.

Iho is comfortable in preaching in both Mandarin and English. His wife, Adna, is a registered nurse (RN) and has been working in the intensive care units (ICU) in various hospitals since 1985. She has been working in the Veteran's Hospital after coming to Madison. Adna is fluent in Mandarin, English, Cantonese and Taishanese (台山). They have one daughter, Esther and one son, Philip. Both graduated from UW Madison.

Iho is a lifelong learner and has an interest in a variety of fields outside theology. These include nutrition/naturopathic medicine, leadership and administration, living system theory, worldview studies, temperament (MBTI) analysis, vegetable gardening, camping, photography, roller skating, airplanes, carpentry, electronics, and car repair. He is an avid sailor and has been sailing since 1974 when his father bought a small sailboat (an AMF Sunfish). His favorite sailboat is the Flying Scot. He is a handy person and likes to fix all sorts of things in the house and in the garage. He has pictures of his different interests in his Facebook page.

He was called into full time pastoral ministry and attended Reformed Theological Seminary (Jackson, MS) from 2017-2021.

He graduated with a Master of Divinity degree in May 2021 and started to serve in our church in June 2021.

You can reach Bill at Email: sychiu1122@gmail.com.

Formed primarily by professionals and their families, Berean is a fellowship group in MCCC, with many families attending regularly. We are from different parts of Mainland China, Taiwan and Hong Kong. Our members span from infants to grandpas and grandmas. If you live in or are moving to the Madison area and are interested in the Christian faith, you are welcome to join this big family. All Berean’s programs are coordinated and supervised by the Pastor and Deacon Board of MCCC. We meet weekly as one big group with other fellowships at church on Friday from 7:30 PM to 9:30 PM. These big group gatherings typically start with a joined singspiration followed by group studies on various Bible books or topics and finish with a period of fellowship time accompanied by delicious home- made snacks. In the Book of Acts, the Bereans were known for not blindly following new teachings but to check the teaching they have heard with the Bible to verify them. This shows their seriousness in rooting their faith in the Bible.

Our fellowship wants to model after the Bereans. For more information on Berean Fellowship, please contact Bill Chiu at sychiu1122@gmail.com (wechat: GlendaHippo).

The purpose of the Zion fellowship is to serve Mandarin speaking students in MCCC. Zion members currently contain undergraduate students, graduate students, and newly graduated young professionals. Zion is a family for all of us and we sincerely welcome you to become a member of this beloved family in Christ.

Routinely, we gather every Friday evening at 7:30 PM at church to study and discuss God’s words – Bible, and delicious home-made snacks will be provided after the study and discussion. We also have some special programs from time to time.

For more information, please contact Bey-Dih Chang at bdchang@msn.com (wechat:bdchang). Again, we sincerely welcome you to join us.

Due to extreme weather, the church service on is CANCELLED!!!!!